THIS POST MAY CONTAIN AFFILIATE LINKS. PLEASE READ MY DISCLOSURE FOR MORE INFO!

Happy Friday lovelies! I hope everyone has had a WONDERFUL week and is ready for the weekend ahead. It’s been a long week for me personally, so I’m really looking forward to relaxing this weekend and spending time with friends.

Okay so now I must apologize because technically, in the blogging world, I am EXTREMELY late to the game with this post haha. I’ve known for months now that the NSale was coming up and I knew the dates and the info, etc. But MAN if it didn’t still manage to creep up on me!!

I also hesitated sharing about the sale even after I realized it was here because I thought people might not really be looking to shop it as much this year as they might have been in the past. Look I get it okay? It’s been a rough year so far and the last thing on most people’s minds is shopping.

However, I took a poll on my Instagram stories the other day and it was about 55% to 45% in favor of sharing the sale, so I decided I would at least share some tips for shopping the sale and my top reccs.

If you’re not familiar with the Nordstrom Anniversary Sale, it’s Nordstrom’s BIGGEST sale of the year where they have their most popular fall fashion items on sale for the coming fall season. It’s a great time to grab some fall fashion items you might be in need of for the cold weather and it’s super nice to be able to shop items on sale for the coming season since normally, items that are put on major sale are at the end of a season and you won’t be able to wear them until the next year.

Now, the reason so many people want to shop early is because normally, by the time the “Everyone” date comes around, a lot of the most popular items are sold out. So even if you can manage to shop the “Insiders” date (which is what I am! To shop this date, you just have to have a Nordstrom credit card) it will help to make sure you have the best shot at getting the things you want.

Okay, now on to the tips and picks.

Tip #1: Know your budget ahead of time.

I’m putting this first because to me, it’s the absolute most important! It is SOOOO easy to get caught up in all of the content people are sharing and think “I need that” but I promise you, making a budget for this sale in particular will save you a lot of headache.

I first learned about the NSale in 2018. I had just started blogging and I really wanted to make sure I was covering the sales and deals that were the most prominent. I remember being at work on a Friday morning and learning that you had to have a Nordstrom credit card to shop the sale early. Well, I wanted to be like all the other bloggers and share content early, so I called right then and there and signed up for my very own Nordstrom credit card.

At that time, I was living in Houston and I immediately made plans to head to the Galleria the very next day on Saturday to shop and get all the things I saw on the other bloggers that I loved and knew I had to share too. Jordan and my brother, Donovan, were also coming up that weekend, so that Friday evening, I sat in the living room for hours, telling them all about the sale and making them look through the pages and pages of things I wanted to buy the next day when we went.

The next day, we got up early and made sure to be at Nordstrom right when it opened. I immediately went around, finding and collecting the things I wanted, as did both Jordan and Donovan. I remember meeting up with them at one point for all of us to see what each other had picked out. I’ll spare going into detail of all the items we had found, but let’s just say together, we held about $3,000 of merchandise (admittedly, most of it being mine).

I’ll also let you know, this was WAY past the limit on my Nordstrom card at the time. To be honest, I didn’t even HAVE the physical card since I had just called to sign up for it the day before. So we actually had to have them type in the card number that I had written down on a post-it note haha.

We maxed out the card limit on the first round of paying for both of their things and part of mine. We immediately went down to the help desk so they could pay off their part of things they bought and I could have enough left on the card for me to buy the rest of my stuff. After doing this, I went back upstairs and immediately maxed out my card again.

Now I’ll be the first to admit, this was definitely NOT one of the smarter decisions I’ve made in my blogging career. After that one day, it took me nearly an entire YEAR to pay off that card completely. I’ve since learned that there are other ways to share sale content, especially when it comes to the NSale (like how I’ll be sharing it today on this post), but I wanted to share this story with you to let you know I understand feeling the pressure from other bloggers and influencers to buy the sale pieces they share. I know it’s tempting to add, add, add to your cart and just plan to worry about it later.

But I also know how hard and stressful it was for me to deal with the repercussions of overspending and going into the NSale without a budget. Some people might be able to do that, but it certainly isn’t me haha. So do yourself a favor and set a budget for how much you’re planning to spend going in and hold yourself to that. It’s 1000% worth it, I promise!

Tip #2: Save things to your wishlist first, and then decide what to buy.

I actually do this for every site haha. If you look at my wishlist on Shein, Nordstrom, Forever 21, Amazon (I can’t even scroll to the bottom of my Amazon wishlist lol), etc you would believe I’m a shopping fiend haha! In reality, I buy things little by little off each wishlist, anytime I have some extra money to spend on something I want.

I also think this helps save me from buying a lot of stuff I won’t actually get my money’s worth in wearing. Probably 7/10 things I save to my wishlists on sites, I end up deleting after I go back a week or so later and take a look at again. So saving it to my wishlist ahead of time and coming back later to buy helps me look at it with a fresh set of eyes and really helps me decide if I care enough about it to buy it or not.

Not to mention, this tactic is especially helpful during the NSale because you can save something to your wishlist before your “shop date” (refer to the chart at the top of this post to see what your “shop date” is!) and then actually decide if you want to purchase it later when you’re able to shop.

Tip #3: Focus on buying basics that you can style with a lot of different pieces.

Finally, I would focus on buying some good basics that you can wear multiple times and get your money’s worth. I am allllll about getting your wear out of things so if I buy something, it’s going to get worn MORE than a few times. As I previously mentioned, I shopped the sale back in 2018 and bought WAY too much stuff. Although I definitely should not have spent that much money and bought that much, I can honestly say I have gotten my wear out of each and every thing I purchased.

For example: I bought a cardigan during the sale that year and it has been the cardigan I literally wear EVERY. SINGLE. DAY. at work. I also bought 2 pairs of very expensive boots, but I have worn them at least two times a week for two fall seasons now and this coming fall will be the 3rd.

So my recommendation would just be to really think about the things you want to buy and ask yourself if you can see yourself getting multiple wears out of it. If the answer is yes, then go for it! If the answer is no, then I would really take the time to think about whether or not you really need it. I’ve certainly bought things before that I really wanted and that I’ve only worn once or twice, but it’s very hard for me to justify buying those kinds of items a lot of the time.

My Top Picks & What I Recommend 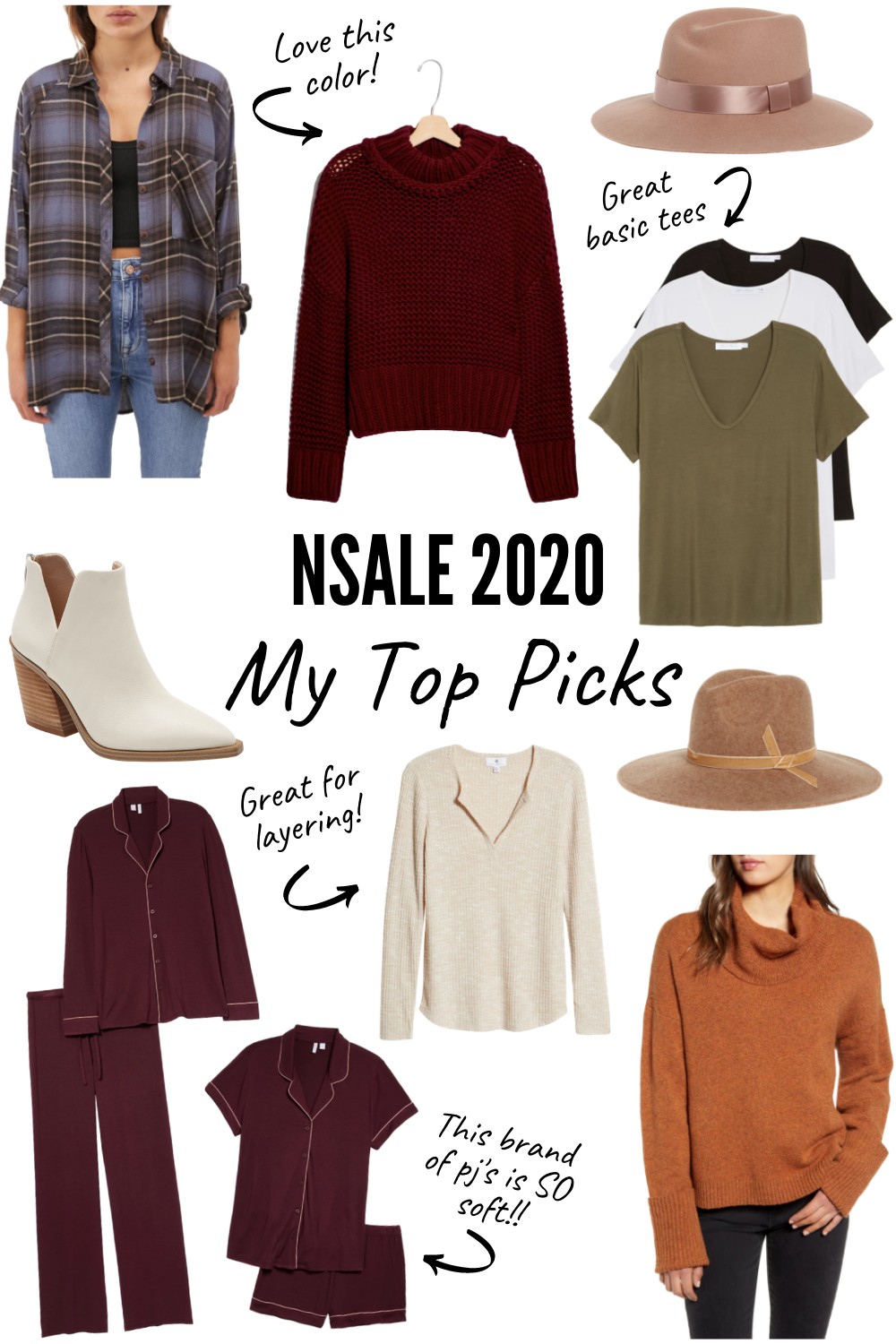 These are all the items I have on my wishlist for this year! I won’t be purchasing all of them, but these are some of the top picks I’ve found that I have saved to my wishlist and will be looking to purchase throughout the season. After the 13th when I can shop, I’ll keep you guys posted over on my Instagram with what I end up buying then. 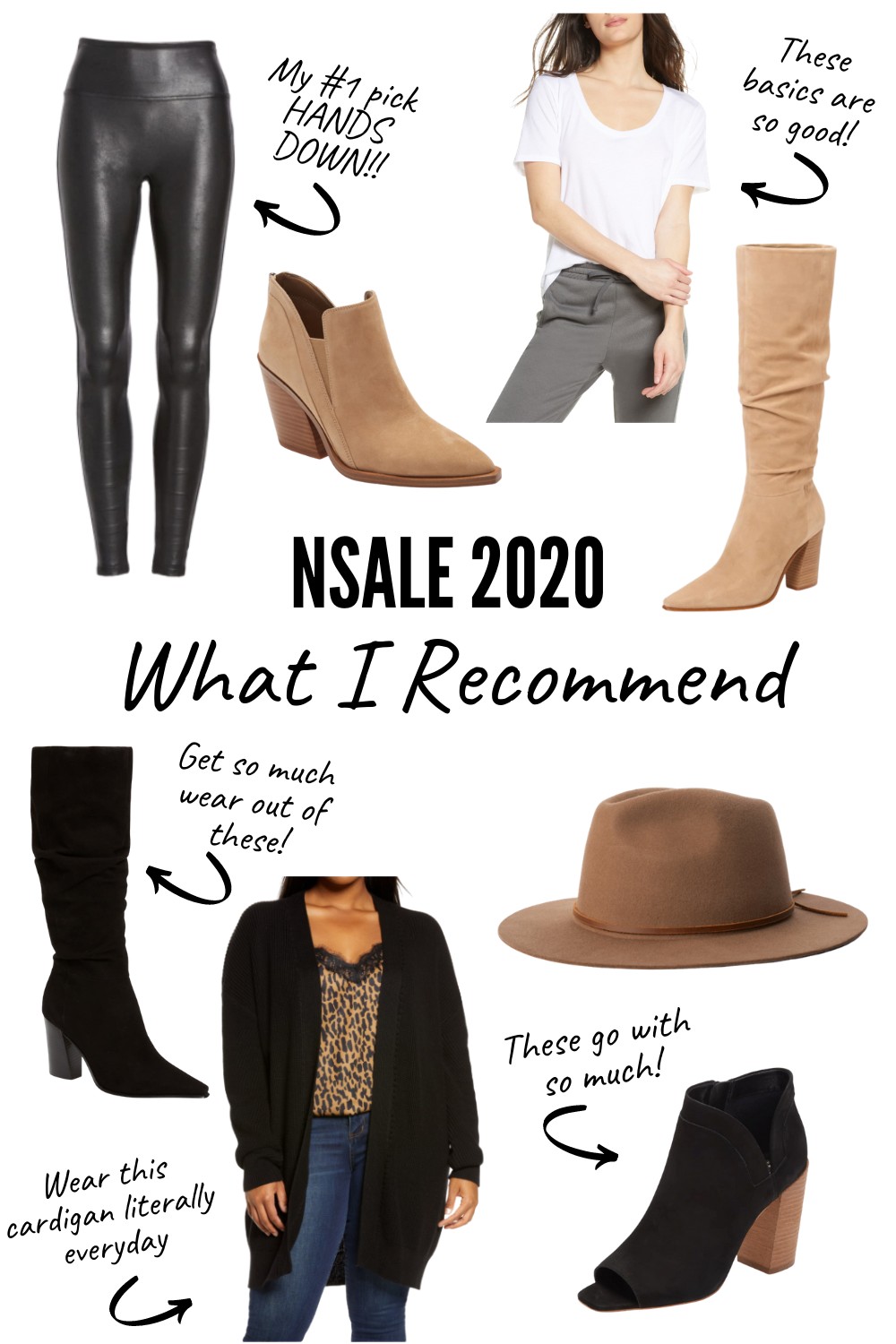 These are all items I’ve purchased a version of in the past! That might sound kind of weird so let me explain… Most of the things I purchased during the 2018 and 2019 NSale are sold out and are no longer being restocked since they are “last year” or older. Some of the things like the Spanx Faux Leather Leggings, they bring back every year since they are so dang popular (and for good reason too… if you buy one thing during this sale, let it be these!!!) BUT most often, they do come out with a “new” version of old products. So the cardigan I mentioned earlier that I bought during the 2018 sale? That almost EXACT IDENTICAL version is now being sold as this cardigan. It’s 95% the same product by the same brand, but it has a different name and has been “updated” so to speak.

So there you have it! Those are my tips and recommendations for shopping the NSale this year. It’s a really great sale and you really can find some great deals. I hope you guys enjoy my picks and have fun shopping the Nordstrom Anniversary Sale this year! Let me know what your fave picks are below in the comments!

Thanks for reading lovelies and until next post, Xx.

Chaos and Coffee is a fashion and lifestyle blog written by Carrington A. Barfield, where fashion and creative ideas are a source of information.